skip to main | skip to sidebar

half a man? He Seems well grounded to me.:) 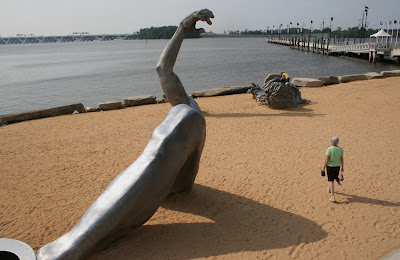 The Awakening, a five piece sculpture dominates a portion of the National Harbor grounds off of the Potomac River. Originally installed in Washington, D.C.'s Hains Point, the sculpture (by artist J. Seward Johnson, Jr.) was moved to National Harbor a The ground appears to be barely able to contain the man caught in the act of trying to claw out of the earth. A foot, a palm, an arm and a leg are bursting out of the mud, while the face is contorted - a combination of anger, fierce determination and effort twisting the facial muscles into an evil grimace. this is so well done more later
Posted by marcia@joyismygoal at 8:15 AM

Love the take on the theme!

My! What an intriguing piece.

What a cool work of art. Great photo of it too. Thanks for visiting mine and have a nice weekend. :)

Happy Weekend. My half entry is posted.

Definitely an intriguing piece of art! Love it! :)

Wow - what a great sculpture!!!

"A vigorous five-mile walk will do more good for an unhappy but otherwise healthy adult than all the medicine and psychology in the world." --Paul Dudley White

************
"Now if you are going to win any battle you have to do one thing. You have to make the mind run the body. Never let the body tell the mind what to do. The body will always give up. It is always tired in the morning, noon, and night. But the body is never tired if the mind is not tired." - George S. Patton, U.S. Army General, 1912 Olympian

I am often asked to describe the experience of raising a child with a disability - to try to help people who have not shared that unique experience to understand it, to imagine how it would feel. It’s like this…
When you’re going to have a baby, it’s like planning a fabulous vacation trip - to Italy. You buy a bunch of guide books and make your wonderful plans. The coliseum. The Michelangelo David. The gondolas in Venice. You may learn some handy phrases in Italian. It’s all very exciting.
After months of eager anticipation, the day finally arrives. You pack your bags and off you go. Several hours later, the plane lands. The stewardess comes in and says, “Welcome To Holland”.
“Holland?!?” you say, “What do you mean “Holland”??? I signed up for Italy! I’m supposed to be in Italy. All my life I’ve dreamed of going to Italy”
But there’s been a change in the flight plan. They’ve landed in Holland and there you must stay.
The important thing is that they haven’t taken you to a horrible, disgusting, filthy place, full of pestilence, famine and disease. It’s just a different place.
So you must go and buy new guide books. And you must learn a whole new language. And you will meet a whole new group of people you would never have met.
It’s just a different place. It’s slower-paced than Italy, less flashy than Italy. But after you’ve been there for a while and you catch your breath, you look around…and you begin to notice that Holland has windmills…Holland has tulips. Holland even has Rembrandts.
But everyone you know is busy coming and going from Italy…and they’re all bragging about what a wonderful time they had there. And for the rest of your life, you will say “Yes that’s where I was supposed to go. That’s what I had planned”.
And the pain of that will never, ever, ever, ever go away…because the loss of that dream is a very significant loss.
But…if you spend your life mourning the fact that you didn’t get to Italy, you may never be free to enjoy the very special, the very lovely things…about Holland. 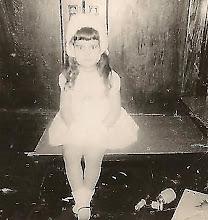 Powerful Women
Live your life in such a way
That when your feet hit the
Floor in the morning
Satan shudders and says,
'Oh, crap...she's awake!'

How many visitors since April 2007